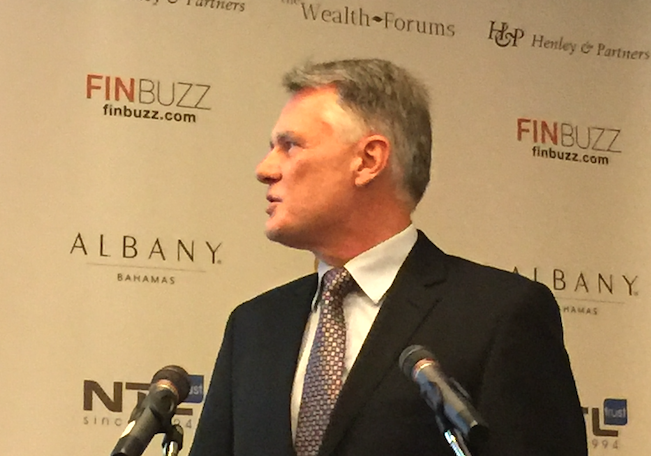 “Highly relevant and focussed,” was one of the comments from an attendee at the London Wealth Forum held on October 4 at the Caledonian Club in the capital. “Wide ranging and also in-depth analysis gave me valuable and useful information,” was another. The consensus among all those who attended the one-day Wealth Forums event was that the organisers had thought long and hard about both the right agenda and the most interesting speakers.

The packed agenda for the London Wealth Forum and Safe Havens Conference focussed on the challenges and opportunities following the Brexit vote. The opening speaker, Andrew Hawkins of ComRes, addressed the topic How did it happen and what happens next, while Professor Michael Mainelli, co-founder of ZYen, addressed the hot topic London as a Brexit Finance centre.

In a passing reference to Donald Trump’s favourite slogan, Caroline Garnham took a critical look at Make Britain Great post Brexit, while David D’Alton, co-founder and director of the British Irish Chamber of Commerce got straight to the point with How to by-pass Brexit.

Colin Stanbridge, CEO of the London Chamber of Commerce and Industr, told the packed auditorium that at this point there is a lack of clarity over London’s future, and in the coming months there is an immense amount of detail to be dealt with.  Fiona Fernie, a tax partner at law firm Pinsent Masons, said that changes to tax rules for long term UK resident non-doms have possibly had as much impact as Brexit on the major reduction in applications for Investor and Entrepreneur visas for the UK.

Looking at the broader picture, a leading expert in security matters claimed that the UK could be safer after Brexit, despite dire warnings from Europol and other sources before the June 23 referendum vote. Martin Dubbey, a former top Revenue and Customs officer, said that the UK produces 40 percent of Europol intelligence and bilateral exchanges of intelligence will continue after Brexit.

Valuable contributions also came from Robert Midgley, of Friends of the British Overseas Territories, who examined the likely effects of Brexit on Crown territories, such as Gibraltar, while John Murray, group managing director of Swan Global gave a native’s viewpoint on relations with Australia.

The topic of citizenship and residency in other jurisdictions was addressed by several speakers, including Mark Pihlens of Henley and Partners, Janos Bako, trade attache of the Hungarian Embassy in London, and Yuri Blazhevych of Multitravel Consultants. Further insights into the options available were provided by Petr Vaclavinek and Thomas Bother, both of Equite Capital. The conference also heard from Michael Hudson who pitted gold against the bitcoin, and James Deen, of Albany Bahamas, who spoke with verve about ‘Plan B.’

With a total of 20 top speakers throughout the day, attendees were able to pop in and out of the conference for drinks and refreshments, while the buffet lunch and evening post conference drinks reception offered excellent opportunities for mixing with the speakers and making new contacts.