China trumps US in Pacific deal 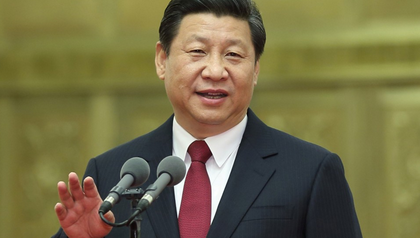 China trumps US in Pacific deal

John Brinkley, a Forbes contributor, points out the benefit to China from Trump’s TPP move: ‘Well, he’s done it. President Trump has withdrawn the United States from the Trans-Pacific Partnership.

“The Trans-Pacific Partnership is another disaster done and pushed by special interests who want to rape our country, just a continuing rape of our country,” Trump said last June.

Trump and his protectionist trade team have made it clear that their principal goal is to stick it to China. Withdrawing from the TPP will have exactly the opposite effect. It’s a gift to China and no one is happier about it than the government of Chinese President Xi Jinping.

Speaking at the annual meeting of the World Economic Forum in Davos, Switzerland last weekend, Xi said China would be happy to take over the leadership role in global trade that the United States has now relinquished. That will be good for China, but not so good for anyone else.’  PHOTO: President Xi Jinpin  READ MORE: http://www.forbes.com/sites/johnbrinkley/2017/01/24/trump-dumps-trans-pacific-partnership-sad/#5d2ed6915660