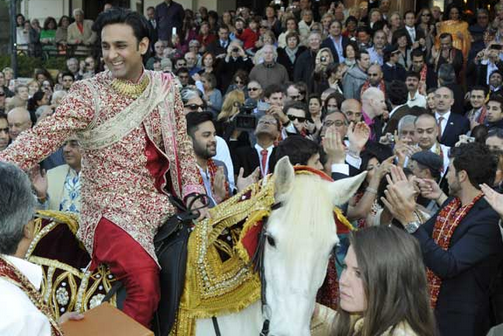 A bill in the lower house of India’s parliament aims at putting a limit on the number of guests that can be invited and dishes to be served at weddings, in a bid to check the “show of wealth” that has become synonymous with Indian weddings.

According to the bill, those who spend above Rs 5 lakhs (a little less than 6,000 pounds) on weddings will have to contribute 10 percent of the amount towards marriages of financially poor girls. The Bill was introduced by Congress MP Ranjeet Ranjan, wife of MP Pappu Yadav.

The Marriages (Compulsory Registration and Prevention of Wasteful Expenditure) Bill, 2016, may be taken up as a private member’s Bill in the upcoming Lok Sabha session.

The purpose of this Bill is to prohibit extravagant and wasteful expenditure on marriages and to enforce simpler solemnisation, Ranjeet told PTI. “Great importance should be assigned to the solemnisation of marriage between two individuals. But unfortunately, these days, a tendency of celebrating marriages with pomp and show and spending lavishly growing in the country.

“These days, marriages are more about showing off your wealth and as a result, poor families are under tremendous social pressure to spend more. This is needed to be checked as it is not good for society at large,” she said.
The Bill seeks that “if any family intends to spend more than Rs 5 lakh towards expenditure on marriage, such family shall declare the amount proposed to be spent in advance to the appropriate government and contribute 10 percent of such amount in a welfare fund which shall be established by the appropriate government to assist the poor and Below Poverty Line families for the marriage of their daughters.”

It says that after this proposed legislation comes into force; all marriages should be registered within 60 days of the solemnisation. PHOTO: Indian Wedding in Monte-Carlo  Press Trust of India